DRESCHEL: To vape or not to vape?

DRESCHEL: To vape or not to vape?

Vaping FAQ , Why Switch to Vaping

Here I am puffing on an electronic cigarette and blowing misty "smoke" rings at the office ceiling.

I won't be able to do this when the Ontario government starts treating e-cigarettes like regular cigarettes in 2016, banning their use in any place where traditional smoking is forbidden. 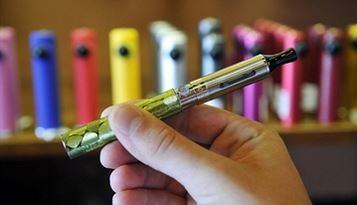 But right now, there doesn't appear to be anything to prevent me from puffing away at my desk, wondering if this is the edge of tomorrow or a postmodern dead-end.

E-cigarettes come in a range of styles from expensive stainless steel refillables to cheap disposables. Mine is a $10 throwaway, the size and weight of a pen, which promises to provide up to 400 puffs, the equivalent of two packs of cigarettes at half the price.

The thing is basically powered by a battery that heats a liquid solution containing nicotine, water and other things, producing a "vapour" which is inhaled like a cigarette only without tobacco smoke.

That's why it's called "vaping." And its explosive worldwide growth is why Oxford Dictionaries chose "vape," as Word of the Year for 2014. Vape is used to describe both the device and the action of inhaling and exhaling.

Briefly, nicotine is the chemical that makes tobacco addictive. But it's tobacco smoke that produces the carcinogenic agents that which kill about 13,000 Canadians a year and an estimated five million souls worldwide.

The packaging of my cheapie e-cig succinctly sums up its claim as a safer alternative to regular smoking: No tar, no tobacco, no second-hand smoke, no smell, no carbon monoxide and no ash.

The shopkeeper who sold it to me warned that, as a nonsmoker, I might get a headache from it. She was right. In summer, I occasionally puff on a cigar, but I don't inhale so I wasn't prepared for the nicotine rush.

Critics of vaping are, however, concerned about more than low-grade headaches. They decry it as a habit-forming Trojan horse, an evil gateway to regular cigarettes for young people, and an insidious instrument for "normalizing" smoking.

Advocates, on the other hand, argue vaping is a revolutionary step in the battle against smoking. They maintain it's not only harmless to bystanders, it's a powerful smoking cessation tool.

They say it's tosh to claim vaping is a gateway to real smoking and point to studies like the recent one from the British Office of National Statistics which suggests e-cigarettes are almost entirely used by current and former smokers, with fewer than one in 300 users being non-smokers.

That, of course, can be countered by recent Japanese research that found some brands of e-cigarettes contain up to 10 times more toxic chemicals than found in regular tobacco.

That's one of the problems with e-cigarettes. Because they've only been around since 2003, standardized manufacturing controls on both the devices and their liquids, which are often favoured, are not in place.

Virtually everyone agrees more research is needed on long-term health effects. But in the absence of conclusive data, Ontario's Liberal government is already demonizing e-cigarettes and ignoring their potential to save lives and health-care dollars.

The government claims its smoke-free strategy is to help smokers quit, protect others from second-hand smoke and encourage young people to never start. But its proposed legislation, which includes restrictions on the sale, display, promotion and use of e-cigarettes, flies in the face of that strategy.

It seems vaping's mimicking of smoking was sufficient to trigger a fearful, priggish response.

I doubt I'll buy another e-cigarette. I kicked the nicotine habit years ago. But as I sit here experimentally drawing on my pocket hookah, I'm mystified why the government wants to ward off hard-core smokers from making the switch before the evidence is in. Clearly, Dalton McGuinty's mantle of premier Dad has been passed on to premier Mom Kathleen Wynne.