Good news! The FDA's push for electronic cigarette regulation, may not have completely adverse effects on the industry after all. For the first time ever, top officials with the FDA suggested electronic cigarettes do NOT contribute to cancer related death, rather, can actually reverse it.

The FDA admitted in a congressional hearing this spring, electronic cigarettes are presenting an opportunity to cut the annual death toll from tobacco cigarettes.

Mitch Zeller, Director of the FDA's Center for Tobacco Products, said before Congress they collectively have an opportunity with this regulation to put a dent in “the death and disease toll” suggesting electronic cigarettes are replacing cigarettes and saving lives.

These developments aren’t surprising to us,  as research indicates combustion smoke from a lit cigarette is what produces the harmful carcinogens that cause lung cancer in smokers. The smoke yields thousands of more chemicals based on the fact it is the product of a heated source.

This combustion smoke from a traditional cigarette compares with the water vapor from e cigs. While the smoke produces tar build up in the smokers’ lungs, singes lung bronchioles and produces mucus buildup, the water vapor option available through electronic cigarettes does none of this. Not to mention smoke from a traditional cigarette turns a smoker’s fingers and teeth yellow, as well as, makes their hair and clothes smell compared to the odor from an e cig vapor, which is barely detectable and only lasts seconds.

However, there are no studies indicating nicotine is healthy, but by simply removing combustion smoke from the equation, and replacing it with water vapor removes a very harmful factor from tobacco cigarettes. We are hopefull that with this announcment from the FDA, maybe someday the government will embrace electronic cigarettes as smoking cessation aid to help reduce the death rates from smoking cigarettes! 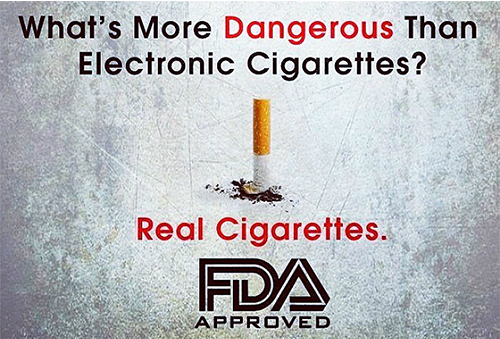