Similar to the Liberal government’s imposed nicotine cap that was enforced on July 23rd, they have also proposed one of the most detrimental legislation thus far: A Ban on Flavours! The public has a 75 day period starting from the government’s Gazette proposal on July 19th 2021 to sign petitions and voice concerns to their MPs ending on September 2nd, 2021.

The flavour ban will drastically limit vapers choice of e-liquid to ONLY tobacco, menthol and mint. We realize that a large portion of our customers use fruit or sweet flavoured e-liquid and those same flavours were the reason you were able to quit smoking cigarettes.

The new Federal nicotine cap of 20mg and proposed flavour ban proves that the government doesn’t think that nicotine strength or flavours have aided in helping people quit smoking. We strongly disagree and encourage all of our customers and their family members to join the fight and visit the Save The Flavours Campaign. You will be able to sign a petition that will go directly to Health Canada, so your voice can be heard!

Health Canada has admitted that by banning flavours it will force current vapers and dual users (individuals who vape and smoke cigarettes) to return back to smoking cigarettes. Further proving that the ban on flavours isn’t to protect the children or adult’s health as the government has continuously claimed, but rather to protect Big Tobacco profits (Health Canada's excerpt below). Since 1966 the harmful effects of cigarettes have been known, yet the Liberal government isn’t concerned about Canadians’ health risks if they return to smoking; they are dismissing them.

“About 46% of current vapers (past-30-day use) aged 20 years and older are dual users (i.e. individuals who vape and smoke cigarettes).The total profit loss to the vaping industry that also manufactures tobacco products may be mitigated by the substitution of tobacco purchases from dual users who would go back to smoking and adults who smoke who would continue to smoke instead of switching to tobacco- or mint/menthol-flavoured vaping products.

What does a flavour ban mean to our customers?

If the flavour ban gets through legislation, vape retailers will legally only be able to sell tobacco, menthol and mint e-liquid.  Currently we offer our customers over 100 flavours and cutting it down to two flavours will be extremely harmful to not only all vapers looking for alternatives to traditional tobacco but also their local vape shops.  Many, if not all vape shops will close and consumers may be forced back to traditional cigarettes.

How you can help?

As ex-smokers, we got into this business to help others quit smoking, now our very survival depends on the people we helped, our loyal customers.  The more submissions we gain, the greater the chance we have to save the vape industry and stop the flavour ban. We must ALL unite and let our voices be heard. Alone, we cannot stop the Liberal government from moving forward with a flavour ban that is intended to protect the Tobacco industry. 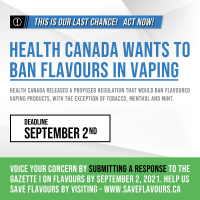