Big things in small packages!  That’s a good description of the JustFog MiniFit POD kit.  It is considered a great vape starter kit for beginners who are interested in switching to vaping, but the MiniFit is also a reasonably priced option for existing Vapers who are interested in a second device. It is one of the better POD systems on the market, for many reasons. JustFog designed the MiniFit to deliver a punch.  Despite the MiniFit’s ultra-small discreet size of 7cm it gives you a solid nicotine hit, as well as an impressive amount of vapour compared to other POD systems that are a similar size. It has a powerful output that you wouldn’t expect, and it definitely beats the other more popular branded devices on the market that have been heavily popularized through social media and word of mouth. It is undoubtedly something you should consider trying if you want to break into the world of vaping.

How Do “All-in-One” POD systems work?

Nic salts are used in POD systems since the tanks are smaller, and the output is less than that of a larger vape, which is why so many smokers have been successful in using a POD system to quit. The quick nicotine delivery of the Nic Salt e-juice and the satisfying hit is a huge bonus if you are trying to kick a smoking habit.

Some POD systems, such as JUUL, Stlth and others, have pre-filled PODs that you can’t refill or re-use,  which limits your flavour and nicotine strength options. Others POD systems, such as the JustFog MiniFit, Smok Nord, Suorin Air and a host of other brands can be refilled.  The advantage is that you can select many different flavours options and nicotine strengths at a much more affordable cost. The main function for a POD system in contrast to other vapes, is that they deliver a lot more nicotine in a much more cost effective and efficient manner. The ejuice lasts a lot longer, and the battery can be a lot less powerful for you to receive the same amount of nicotine.

The output of vapour from POD systems is not nearly as much because the batteries are much less powerful.  To offset the lack of power, significantly higher concentrations of nicotine are used to deliver a satisfactory throat hit. POD systems are also a mouth to lung hit, which is similar to the hit you get from a cigarette. They are a great vape starter kit, or great for on-the-go as they tend to be smaller, more compact, quicker to charge and they are far more cost effective. Another major reason for their recent popularity is that PODs don’t require changes to the coil or atomizer which turned off many users from the larger vape mods.  The coil is built into the POD and never needs to be changed.

Whatever kind of vaper you are, experienced or not, you can definitely find a use for a POD system in your vape artillery. 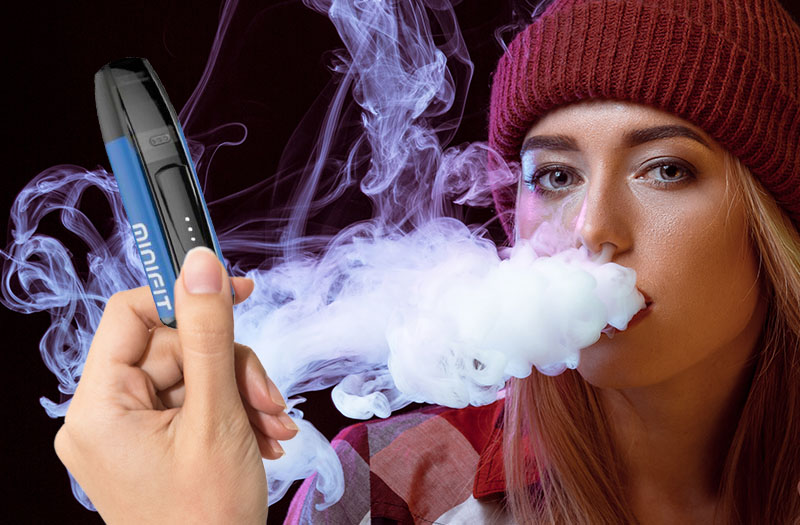 What is the JustFog MiniFit “All-in-One” POD system?

You may be curious about some of the specs that you can expect from this device, whether you are a well-seasoned vaper, or if this is your first-time doing research on vapes and POD systems, the breakdown of the device is quite simple.

The MiniFit is a very compact POD system, but has an impressive 370mAh battery which is significantly stronger than the JUUL battery, which runs at 200mAh. There is a couple bells and whistles when it comes to the battery, as it has a battery life indicator, and an on and off function, which you can’t find in every smaller POD device. It has an impressive 3.4V output capacity and with the battery function being much higher than its competitors, it is also rechargeable with a universal micro USB charger. Additionally, to the JustFog MiniFit outputting a ton of power, vapour and throat hit for its size, it also has a fast charging battery (20 minutes to fully charge), which makes this highly portable device extremely convenient.

Another bonus with this POD system is that the PODs are refillable, but also replaceable. With a large majority of POD systems, you use them once and then you have to throw the entire POD system out, but with the JustFog, you can actually refill the PODs multiple times, and they only need to be replaced when the internal coil is used up. The construction of the PODs is also great with a 1.6ohm coil, filled with Japanese cotton and a large capacity of 1.5ml for the nature of the system. They are also easy to refill which makes them especially notable since it doesn’t limit you to a few generic ejuice flavours. Since the tank is a good size, you also need to carry significantly less ejuice around with you making it even more portable. Nic salts are used in POD systems since the tanks are smaller, and the output is less than that of a larger vape, which is why so many smokers have been successful in using a POD system to quit. The quick nicotine delivery and the satisfying hit is a huge bonus if you are trying to kick a smoking habit.

The JustFog MiniFit POD vape starter kit comes in a selection of colours; red, silver, blue, black and gold making the choices much wider than that of other POD system competitors. The actual JustFog MiniFit starter kit is priced well, with the replaceable PODs running at around $12.99 for 3 replacements PODs.

Is the JustFog MiniFit the Best Option for You?

The JustFog MiniFit is a great option for anyone. Whether you are just starting and want a smaller POD system or you have a large vape and you want something smaller, for on-the-go or discreet occasions that packs a great throat hit, the MiniFit should be on your list to checkout. It incorporates a lot of the best features from POD systems and mods that you don’t get in every POD system. You can always count on good flavour, and a worthwhile hit from this little system, it also has features like being refillable, and a fire button like larger vapes. If you’re looking for a cost effective vape or POD system this is also a great option, not to mention the low price of the replacement pods, as well as the versatility of the different ejuice choices since it’s refillable. You can refill the PODs with any flavour or nicotine strength you want, which combats the issue that a lot of POD systems present, having limited generic flavours and strengths. There aren’t many bases that the JustFog MiniFit doesn’t hit, so it’s a pretty effective option for most needs when it comes to a POD system or just a vape starter kit, or for on-the-go. It’s tiny, but packs a massive punch, and it’s an effective choice especially compared to some of the inferior options that are on the market. If you’re unsure about ejuice choices and how to choose what are best for this device and you want to know more about nicotine salt, click here!.