An article below from Global News discusses the Ontario legislation banning the use of personal vaporizers where smoking is prohibited. Well I don't completely disagree with the new rules I believe that grouping smokers and vapers into the same category isn't solving the real problem. Should vapers be able to use their device in a restaurant or a store? The answer to this is NO. Everyone should be concious and respectful of others around them and not interfer with their personal space, I don't think someone who switched from smoking to vaping would a appreciate someone's vapour in their face while their eating.  That being said one of the main issues I have with these rules is how they are grouping smokers with vapers together. The major difference between smoking and vaping is that while smoking produces second hand smoke, which is a known carcinogen, vaping does not as it is not combustible. This factor alone should be enough to establish that smoking and vaping are nowhere near the same threat. Also one other point to be made is the Ontario Government is telling ex-smokers who have quit smoking using a vape to now congregate with the smokers exposing them to second hand smoke one of the reasons why they quit smoking. Does that sound fair? Legislations need to recognize that vaping isn't a fad and its here to stay.  I agree that there needs to be regulation and legislation but it has to be fair.

TORONTO – E-cigarette and medical marijuana users in Ontario will soon be banned from smoking or vaporizing anywhere regular cigarettes are prohibited, unless the Liberal government changes its mind – again.

The new rules come months after the Liberal government backtracked on electronic cigarette regulations just one day after an exemption for medical marijuana came to light.

The e-cigarette rules were supposed to come into effect Jan. 1, 2017 to ban their use in enclosed public places, workplaces and certain outdoor areas.

But after the public learned of a medical marijuana exemption and that it meant users could vaporize in restaurants, at work or on playgrounds, the government put the rules on hold and went back to the drawing board.

The new regulations are now posted for consultation for the next 45 days. Associate Health Minister Dipika Damerla would not rule out more changes to the rules after that time.

“We look forward to the feedback and that is the point of consultations,” she said.

These regulations have “struck a balance” between the rights of medical marijuana users and all other Ontarians, Damerla said – repeating comments she made about the original set of regulations in November.

When asked why this new balance is better, she said, “We committed to reviewing the regulations around medical mariju 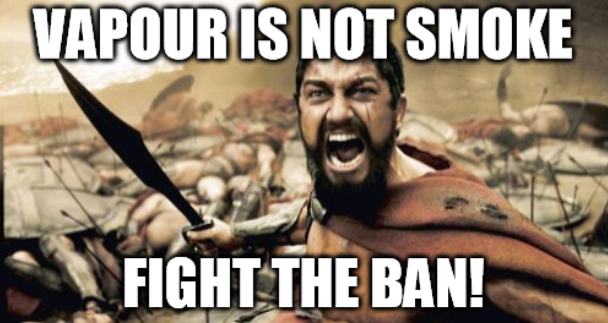 ana and we’ve kept our commitment.”

Jonathan Zaid, the founder of Canadians for Fair Access to Medical Marijuana, had applauded the original exemption, saying users need their medication to live a better quality of life.

He said Thursday he is disappointed the government has reversed its position.

“I thought the government was willing to work with medical cannabis users to create a regulation and an exemption that works for both the public health and public safety and medical marijuana users, but it seems like this backtrack has kind of made it fully inaccessible for people to use their medicine, which I believe is against their human rights.”

Both opposition parties criticized the government’s handling of the file, with NDP health critic France Gelinas saying the Liberals should have made clear rules when the legislation itself was passed last year.

“This extended period of time makes it worse and makes it even more polarized than what we had before,” she said. “We had a chance to be ahead of this. We wasted that opportunity.”

The new regulations, which could come into effect July 1, expand the definition of e-cigarette to include “e-substance,” expand the list of places where e-cigarettes cannot be sold and set out rules for their display and promotion.

On Jan. 1 it became illegal to sell or supply e-cigarettes to anyone under 19, but the new regulations allow parents or guardians to supply them to minors for medical marijuana purposes.

A vaporizer is defined as an electronic cigarette or other device that contains a power source and heating element that’s designed to heat a substance to produce a vapour to be inhaled through the mouth.

Vaping advocates say e-cigarettes should be allowed wider use because they help users quit smoking. Damerla said Ontario is waiting to see if Health Canada officially designates them as a smoking cessation device. If so, the regulations could be changed, she said.